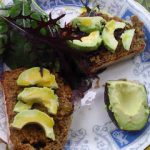 Organic jams and organic cereal and milk. Organic bananas, apples and pears. Today pushing the boat out even further, I served organic avocado and organic tomato on toast, with a little organic lemon juice and Himalayan salt on top. Always the raised frequency water and then some background serenading, including Chopin, more Chopin and then Love by John Lennon and Yoko. 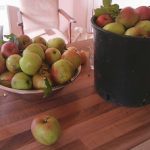 Has it occurred to people yet that 5 star hotels and Mitchelin starred restaurants don’t even serve clean food. Don’t even try to. The likelihood is that every ingredient is laced with pesticides. Take your average tea bag – Bleached: Yes, the same chemical bleach people may still clean their sinks with but not here; all shampoo/conditioner/shower gel/ kitchen and bathroom cleaners are not harmful to the environment, chemical-free and no animal ingredients or testing. 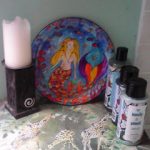 And the tea leaves inside, those tea plants will have been sprayed until the cows come home, it may not have rained for weeks so little of it would be washed away. And the poor people tending and picking the leaves, do you reckon they’re healthy? And/or getting a fair price for their risk and labour? 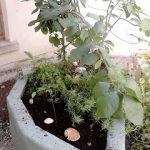 So I’m giving my place 7 stars, although it’s unorthodox! For consistently aiming for mindfulness, peacefulness, being cruelty free, fairtrade, organic, acoustic and plant-based. No ducks pulled apart for the bedding. No animals sheered. 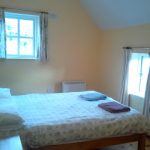 It’s like I met a couple traveling the world but still gainfully employed. He said he was in mobile phone development. I said brilliant, have they made one safe yet to put to your ear or how is that research progressing? He said they’re not even looking at it. Companies are still only commissioning innovations in speed and size. Money no object. Radiation no object. Health no object. At Harmony Hall, we are wifi free and no TV or radio. No one gets to syphon in misery on the consciousness here. I still have a mobile phone but consider that technological harassment really…I know this as I woke up trying to turn off the alarm on it and found myself saying out loud, ‘I said no!’ and we all know that No means no! 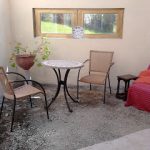 Of course, I leave it to you to decide what you actually call quality! Personally, I respect hospitality and sales people who care whether the customer lives or dies. 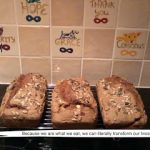 Take nothing for granted. That new God-forsaken plastics recycling plant Trifol, in Laois, is selling its ‘finest’ melted down plastic to coat Irish red apples (Note to self, must do something about that before it gets off the ground. Their process and other stuff is good though so just want to keep their products out of the food chain). If potatoes are not organic, they have been sprayed at least 30 times while they’re in the ground for their short 6 months. Salads, including celery, cucumber as well as leaves are particularly absorbent and should definitely be eaten organic and the body only benefits from the nutrients if they’re raw so don’t heat anything about 40 degrees if you don’t have to. 100% of bread has trace pesticides in it now. And we are eating the equivalent of a credit card-sized amount of plastic every day. 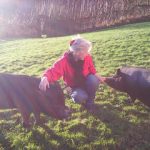 I know it’s a slow journey to eco awareness and living in line with your conscience. Only some of my breakfasts are fully organic – the Linda McCartney sausages and waffles have a few other things going for them though, like being packaged in simple card and also being tasty and converting many a passer by to give up eating the poor, confined animals, being fed GM and farm-sprayed feeds and hay, which comes into the food chain through meat and dairy.  Don’t think it goes away. Those chemicals accumulate and disable four of your crucial digestive enzymes – hence so much intolerance to gluten. We literally can’t break things down anymore, even if they were once edible. 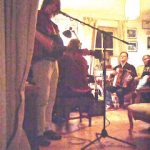 To know all this, you might worry that I’m on the war path and likely to put people off. However, the atmosphere here is super calm – because of the sacred geometry and solar orientation of the house. The nature of the light and the animals and my energy too make it a rejuvenating place to stay.  It is a laugh and not at anyone’s expense. It seems such an obvious commitment to not trash the environment or the lives of others but it’s so rare to find. It’s no one thing that brings a palpable relief to guests. It is the whole thing: the food, the golden proportion of the rooms, the piano tuned to 432 hertz rather than the more abrasive 440 of your average orchestra these days. 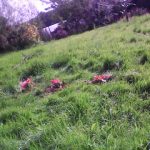 And don’t mind the lawn please. I am re-wilding!!! Releasing my addiction to cultivated grass with no purpose and much work and petrol to a labrynth of shrubs with edible fruit and flowers for early-waking bees and another section nut orchard and another part more forest garden, with many layers of canopy. All aiming to provide food for the flora and fauna here – including me. I have thought I had the highest consciousness on the property but it turns out it is held by a little stone I found at Baurnfree. Then probably the birds, then the animals. In between the stones and the animate life, trees and other plants have their superior presence. Dammit, I’m probably at the bottom of the pile. But, if I listen carefully, I can be a good steward of the land at least.